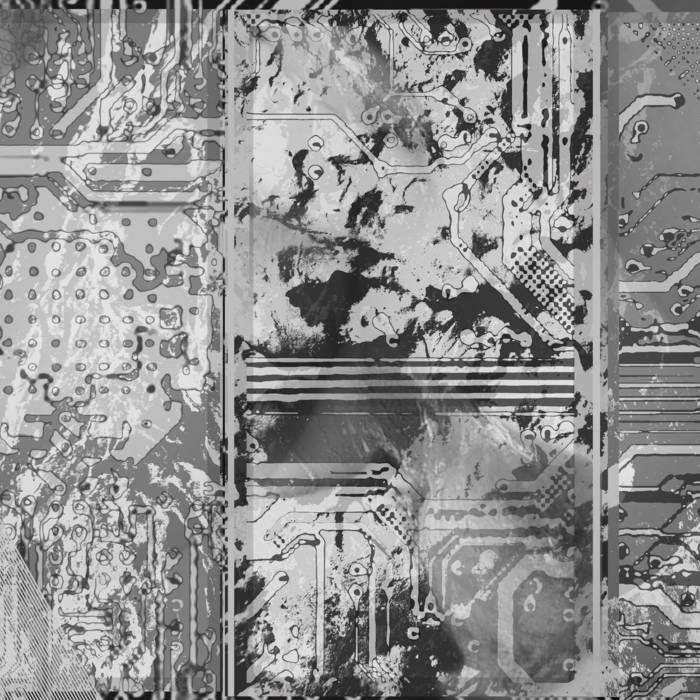 The 5 artists included in this split release are based in disparate geographical regions of Earth: Romania, Argentina, Massachussetts USA, San Francisco USA, and Normal IL USA. One of Aubjects’ central interests is to juxtapose calculated-technological and intuitive-organic notions. This collection of works from several remarkable creative perspectives is another unique iteration of this aim. Two 60 min. cassettes come in an oversized jewel case designed to fit 3 tapes side-by-side; the space for the 3rd tape is taken up by a unique resin art piece by Rik Leipold aka Objet Plastik.

Alan Courtis is an experimental guitarist / multi-musician based in Argentina, whose discography is in the triple digits, as is his luminous list of collaborators. Courtis’ work is intuitive and adventuresome, often utilizing unusual instruments, tools, tunings and treatments. He stated in an interview from 2015, “the most interesting music happens when we’re not completely in control.” His work is always intriguing, likely because of his fearlessness to try new combinations of musical elements and collaborators.

Somnoroase Pasarele is a Romanian duo dealing in abstract electronics. Their name (Sleepy Birds) comes from a bed time poem written by Mihai Eminescu, national poet of Romania. Our first awareness of them came from a recording released by Czech label Baba Vanga called ABECD. They’ve since had other equally fascinating recordings released on Tymbal, Czaszka, and Magical Garage Taste. Their style is distinctive, utilizing atypical synth sounds and asymmetrical rhythmic elements. Often there is no rhythm at all, and strange textures predominate. The feel of much of their music is strangely unsettling. Interruptions, hiccuping sounds, discordances, and other artifacts of chaos / chance (improvised or scripted) fill each moment with immediacy. Their sound constructions shape-shift through time, coaxing the listener insistently through winding pathways of tension, release and other dynamics.

Crank Sturgeon has been exploring “the unwieldy commingling of noise and performance art” (from his bio) since the early 90s. He has worked heavily in sound, performance, sculpture, photography, and installation (Hoboplane is of note); faithfully positing disciplined madness in all his creations. He tends to overlap mediums. He is a sound-searching electro-acoustic gear-builder, who creates unique sound instruments, plays and records them. Mr. Sturgeon’s work is spontaneous and inspired. His performances interweave sculptural, visual, and sound information with an intriguing theatrical flair which flows freely off-the-cuff.

D. Petri has been working with Dog Hallucination since 2006 as editor, musician and idea contributor, and has worked heavily with close friends in Amalgamated, Homogenized Terrestrials and Gushing Cloud. He also owns / operates the Aubjects label in pockets of available time. This initial work as Directives is based in experimentation with guitar sound, utilizing approximately 5/1 pre to post processing ratio. Equipment malfunctions and analog artifacts resulting from primitive recording techniques are captured and digested into software, where they are subsequently enhanced, reconstructed, edited and manipulated. Intuition and primitiveness characterizing the original solo guitar performances (recorded on junky old cassettes with low fidelity microphones) is digested into a webwork of digital mixing, manipulations and occasional sound additives.

Rik Lee Leipold is an artist and resident of the Tenderloin neighborhood of San Francisco. Over the last six years, he has been using resin as a material to embed objects in works of art. Recently, he was awarded a grant from the Wildflowers Institute to help fund larger projects. One project has been filling pot-holes in the sidewalk with clear resin and street detritus.