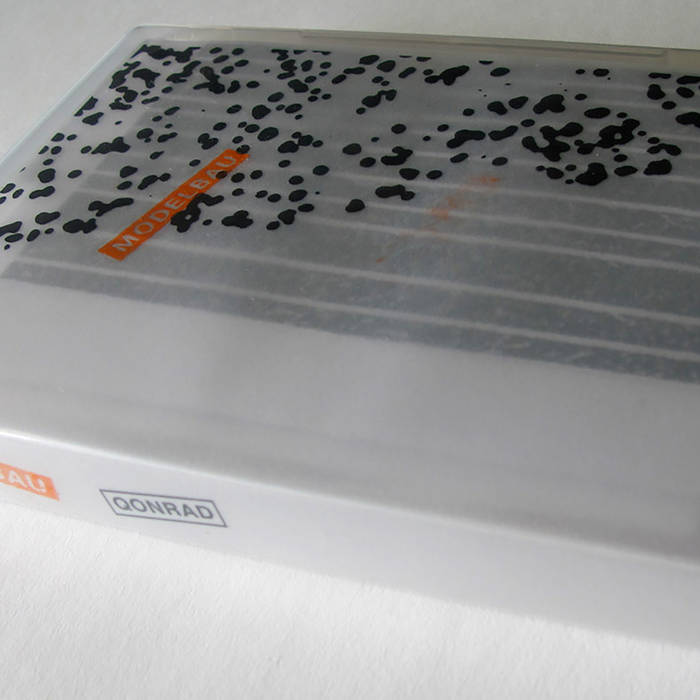 22 newly created & selected (by the Aubjects staff) works by veteran sound artist Frans de Waard under his Modelbau category. Frans de Waard has been actively participating in the underground experimental music scene since the early 80s under many names and with many collaborators. Projects of note include Kapotte Muziek, Goem, Beequeen, Zebra, and Shifts. The list of projects and collaborations is long and interesting.

Frans' philosophies are quite in harmony with Aubjects'. He offers us the following text to inform the curious on what it is that this work Qonrad and what the Modelbau project as an entity are about:

"Modelbau is not the latest in a series of names used to create music, but it is indeed the latest one for a solo vehicle. Each of the names, and that includes my own name, stands for something particular, an idea, and something not found in the other monikers I am using. Modelbau is, like Freiband, not a proper German word (it should be Modellbau, but I thought that looked ugly) and as such is probably already a lo-fi name, and as such also very personal. As a musician I have noy a particular instrument, nor do I favour any technqiue, and I think one should use what is needed for a particular project or a piece of music.

When I started Modelbau, I wanted to use various lo-fi sound sources, such as Dictaphones, walkman, shortwave radio, small synthesizers and such like. This would not be a project for improvisation, but more or less planned pieces of music. All of which to be released in the digital domain only. That was in 2012. Now, in 2017, almost nothing is left of this outline, and yet the msuic is very much what I envisaged as Modelbau. These days Modelbau uses pre-recorded cassettes, iPad apps, sound effects, laptop, shortwave radio, small synthesizers, ancient 2bit sampling device; everything is recorded on the spot, as is, and without multi-tracking and very minimal editing (save for fades and mastering) released as downloads, but also on cassette, CDs and CDrs. Vinyl is only a matter of time. Whenever Modelbau plays a concert (all of which are recorded) preparations are made, and these are also recorded; sometimes they have these preparations can have the length of a concert, but they can also be single pieces of a few minutes. All of these recordings are archived and whenever a release is prepared, the latest sessions are listened to again. 'Does it stand the test of time', is it still interesting.

'Qonrad' was recorded during January and February 2017 as part of some intensive period of rehearsing and recording for concerts in February and April. When done, everything was reset and some spontanous music was recorded using a simple set-up of two iPad synthesizers, analogue effects and a whole bunch (more than two hours) of short pieces were recorded. All of the music was inspired by the 'non-keyboard electronics' of Conrad Schnitzler, to whom this music is dedicated. This is something else from Modelbau; more electronics, concise and to the point. A companion release, 'Confluence' will be made available on Bandcamp only on August 4, 2017 (the day of Schnitzler's passing in 2011), https://kormdigitaal.bandcamp.com/

This release comes with xerox artwork that one is encouraged to reproduce and use as wall paper."
- FdW